-my life as an artist in Denmark 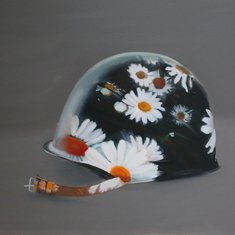 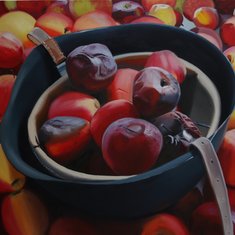 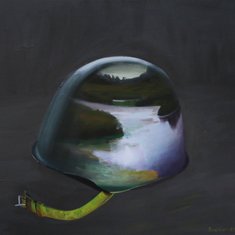 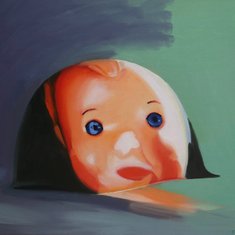 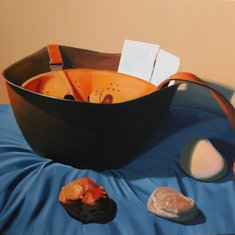 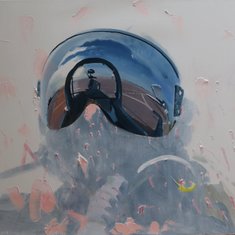 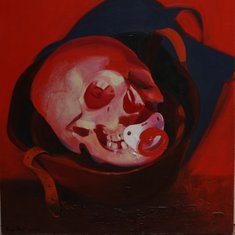 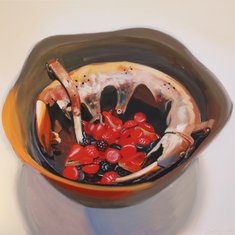 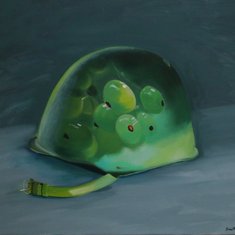 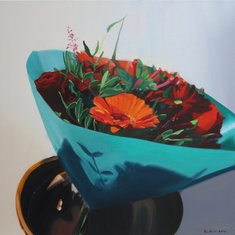 Step by step // Hand in hand // Truth and trust

In Eesti Sõjamuuseum (Estonian War Museum), from October 29th 2017 until January 28th 2018, you could see an exhibition from our time. Artist Külli Suitso showed a suite of paintings Kiiver/Hellmet between Peace and War and documentarist Imbi Paju presented two documentary films Memories Denied, and Sisters of the Gulf of Finland. Together they serve the collective memory, not of Estonia, but for all of Europe, and lead a way to live with an unforgettable past. The final questions though, remain.

Most of us have experienced an awful Lovestory, where the name of the loved one, that you have to let go, turns up all the time. You have to face it, and deal with it, before you can let go. The time you spent together, the touch of the hand, it will be with you all ways. Some days stronger, more days weaker and weaker - until you, on a new day, recognize some memories, and encounter the challenge with new strength.

But, how the character of your strength then will expose, is up to you and your values.

And the choice of values are built in circles of intelligence, emotion, experience and courage.

In the summer of 2017, I visited Estonia for a special occasion, the opening of the Art exhibition Kiiver/Hellmet between Peace and War by Külli Suitso in Tartu Arthouse and the presentation of the book by the same name, edited by Imbi Paju. Coming from Denmark I was excited to go and visit the Baltic region. I felt like going to a huge family gathering, where I could meet and talk to cousins, that I knew of, but yet also only knew remotely by name. We share the energy of the North, the sea, the land of forests and farm life through generations. We share the humour, the strong feeling of identity and self esteem, and the noble history of our flag, that fell from heaven in the 13th. century in Estonia, so the legends say.

In writing an essay for the Külli Suitso artbook, I learned about the personal history of the artist Külli Suitso, who was a student, when Estonia regained its freedom in 1991. She told me, that Estonian schoolchildren were taught to use firearms and weapons, when she was only a girl, and how parades always took time on children’s showtime on television. I saw the documentary films by Imbi Paju, which were made on a lot of research and also were based on Imbi’s personal memories of her Mothers nightmares. The regrettable past of Estonian women and men became alive before my eyes.

Visiting artists in and around Tartu, I learned how lives of everyone still is infected by the dark ages of war and suppression. Having lasted almost a century, it is still here.

Experience from the other side

A friend of mine, coming from a Russian speaking republique, now living in Denmark, used to listen to the radio, tv in Russian media, just to comfort her brain with a language, she easily understood. From her resumé I learned about the massive propaganda and undermining of the west, that you are listening to on a daily basis. It was deeply depressing!

Personally, as born 15 years after WWII, I have had only a few, but very impressive and direct experiences with Soviet-Russian influence: In 1986, when I gave birth to my firstborn son, the nuclear powerplant Tjernobyl near Kiev vent up in a huge explosion, and polluted the air, not only over the neighbouring Soviet states, but all the way also to Denmark, and more. For many days, no one told the truth. It was all over the news, when I sat in the hospital with my baby in my arms. Welcome to the world, my beloved!

- Recently, in the winter of 2017-2018 a new cloud was registered over Europe. Our scientists are guessing, where it comes from, because there are only lies and silence - still after 30 years. It is deeply depressing!

How to overcome violence, that effect your life, your dreams, your hope, your country? How to overcome the crimes of WW II and of post warcrimes from the Soviet era? How to comprehend? New generations, how shall you involve and resolve?

Artists in Estonia are speaking out about the lack of truth and trust, which is needed in a civilized society. The writers, the painters, and steady working film documentarist Imbi Paju - they enact the phase of facing the truth. Telling again, and telling again new angles. Denial is no more a solution, because it only cover your burning cheek and acing heart.

The final question is: What are the values in our time?

What happens when Humanism becomes a ’city in Russia’..? as we say in Denmark.

If greed and money rule everything?

- Just look briefly over your shoulder and remember.

- Just look down on the rubble and the fire, still happening.

- Just listen to the documentary to reflect the experience of one hundred years.

Only, when we confront the Sodoma and Gomorra intelligent, we can make a new choice. A choice to forgive and let go of those, who are to blame. A choice one day that will help healing emotions.

Only, then it will be possible to make new, courageous decisions. Step by step, hand in hand it becomes possible to turn the Hellmet/Kiiver upside down and fill it with apples and bread. 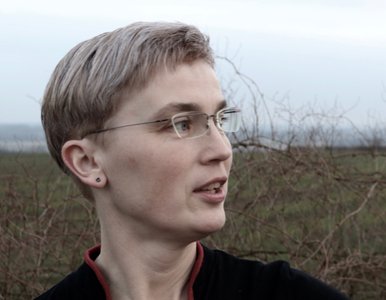