During 2014–2017, I worked on a series called "Helmet". One of the first pieces was an oil painting "Helmet with blue and yellow", which was completed in March 2014, a short time after the annexation of Crimea by Russia.

The helmet is a powerful symbol. Helmets are usually associated with war, disaster, suffering, death … but also protection.

Specific, distinguishable symbols about a soldier's affiliation, as well as rank, are attached to the helmets and uniforms of military forces. But the people inside these helmets and uniforms – people who have been sent to fight for or against a greater cause – still have their own thoughts, feelings, wishes, dreams, fears, yearnings and ... fate. 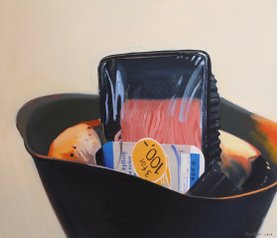